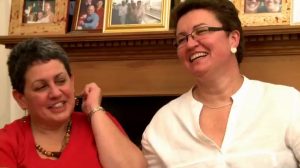 Jackie Nunns – After a long career in nightclubs and restaurants, Jackie moved into the children’s education sector and now heads a social enterprise providing playschemes for inner city children. Usually preferring books, Jackie has nevertheless enjoyed ten years of guidance in film from wife Angie, a lifelong fan of movies of all genres. At home in London, UK, Jackie’s interests are varied, often returning to the themes of lesbian history and relationships, childhood and family. She rates being a mother to her now grown up son, as being the best adventure ever. But making a film came pretty close.
Angie West – After a miss-spent youth – one spent in pursuit of misses – Angie took to the roads as one of London’s few female taxi drivers, and a lifestyle that allowed satisfaction of her love of shopping, socialising and exploring current issues. OUT spoken in every sense, Angie contributed to the gay movement of the 70s and 80s through marches and a lead role in Lesbian Strength between ’83 and ’87, typically organising events and persuading women to buy her t-shirts for fundraising purposes (of course). A keen follower of film after early awakenings to Sophia Loren and Doris Day, Angie lately explored world cinema and LGBT film with wife Jackie, before accepting the challenge to get behind a camera herself, for the first time in 2011.
Their short film “Angie & Jackie Final Cut” won the 2013 Shropshire Rainbow Film Festival “Favourite Short” award, voted for by the audience.  Their other films include Another Woman’s Scent and Mark Bunyan Very Nearly Almost Famous.