Trevor’s life has become a void, following the passing of his wife and long term companion, Doris. Days run into weeks, as Trevor slowly finds himself isolated and alone, and unconcernedly slipping towards death. A chance encounter in the park with a mysterious stranger equally troubled by his own past jarringly reawakens him, and forces both men to once again start to live. 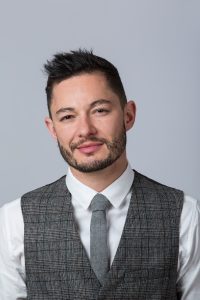 Jake is a writer and director based in London.

Jake’s first film, XWHY, which he wrote, directed, produced and starred in, was nominated for The Iris Prize.

Brace, his third screenplay, which he also produced and starred in, is currently finishing its festival run. It screened at 28 film festivals worldwide, was Jake’s second Iris Prize nominated screenplay, and won Best Short at Queer-Streifen festival, Germany, and the Kinsey Award at the Bloomington Pride Film Festival, Indiana.

Chance is his fourth screenplay, which he also felt strongly about directing and co-producing. Working with actors and crew familiar to him, he felt that Chance was an important story, that needed to be told.