Bohemia, 19th Century. Ladislav, the mischievous son of a landlord, terrorises the village with cruel jokes. War breaks and Ladislav is forced to hide in a monastery, where he unexpectedly discovers his hidden desires. He returns home and befriends Jan, a sensitive young poet. Together they experience moments of undiluted happiness. However, passionate Ladislav soon becomes jealous and his endeavor to dominate Jan triggers a series of grievous events.  A dramatic history of the rise of one of the most influential Czech writers, paved with flesh, bones and blood.
A black comedy based on a true story, a queer literary encyclopedia, and a historical picture book in one. 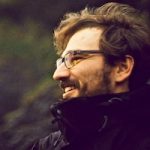 Ondřej Hudeček was born and raised in the Czech Republic. The most valuable education he has ever received was watching re-runs of South Park. Apart from that he studied directing and cinematography at Trebas Institute in Montréal and at FAMU in Prague. Influenced by anything from New Hollywood to European art house cinema and video games, he made several shorts that were screened and awarded around the world. His latest short film Furiant/Peacock was screened at Karlovy Vary International Film Festival, Toronto Film Festival and Sundance Film Festival, where it received the Sundance Short Special Jury Award for Best Direction, and is now being developed into a feature