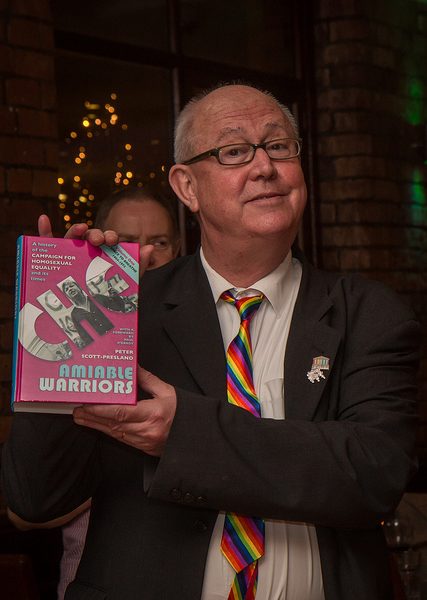 Peter Scott-Presland, author of “Amiable Warriors, Volume 1: A Space to Breathe, the story of the gay pioneers who founded the Campaign for Homosexual Equality, 1954-1973” was in Shrewsbury during IDAHOT (International Day Against Homophobia and Transphobia), the 17th May, for a book reading and signing.
Hosted by the Shropshire Rainbow Film Festival, the event took place at Two Fat Rascals Café, Riverside Precinct, Pride Hill Shopping Centre.
‘If you want to understand how we won LGBT law reform in the UK, read the history…and remember with pride the campaigners who trail-blazed the equal rights we now enjoy.’ Peter Tatchell
‘This wonderful book celebrates those early days of CHE and honours those brave pioneers who weren’t afraid to speak out in the fight for Equality in what were unenlightened times. I’m proud to have been there.” Paul O’Grady
Website: http://amiable-warriors.uk/

Peter Scott-Presland was on great form: entertaining and informative. He read from personal accounts in the book, which was riveting. A really good discussion followed and a number of books were sold. A big ‘Thank you’ to Peter, who put so much into making the event a success and Maria and Karen at Two Fat Rascals for hosting it.