The story of Sam, who is transitioning from female to male. We see the changes he is undergoing to achieve the body he wants, and how he is coming to accept these. 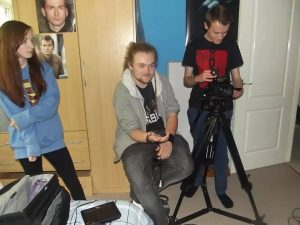 Co-Director/Producer: Jonnie Knights
Co-Director/Producer: Caitlin Gill
Director of Photography: Simon Ramshaw
Sound Designer: Paige Lamb
Mentored by Daniel Elliott.
In the summer of 2014, seventeen young people (aged 15-18) from across Newcastle and Gateshead worked with industry professionals to research, plan and produce four short films about the people, places and stories that make up their world.
Through a series of intensive filmmaking workshops at Tyneside Cinema they developed a variety of skills including storytelling, camera, sound and editing in order to bring their ideas to life.
Jonny and his group chose to tell the story of his cousin, Sam.