Lucy and Johanna are on their honeymoon. Johanna is partially, and Lucy profoundly, deaf. They arrive at a B&B where they are greeted by a sullen landlady. They are both annoyed with her demeanour, albeit on different levels. The nature of signing allows them to be carefree about quarrelling in public. A seemingly insignificant disagreement silently turns into a hurtful argument, as the noise of the weir dominates the background. 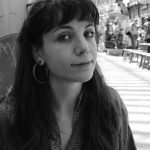 Ronit Meranda grew up in Istanbul, Turkey. Being interested both in arts and films she moved to London in 2004 to do a BA in Fine Arts at Chelsea College of Art and Design where she discovered and pursued the art of making videos. Since then, she has worked on various films and documentaries in Europe and Africa. She has collaborated with local communities, and other creative practitioners to raise social issues and to recognise what tends to be outside the mainstream.