George Montague is fighting for an apology over his arrest in 1974 under anti gay laws. This is his story…. 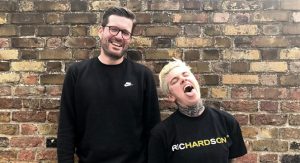 Emily and Nev first met working at advertising agency Wieden and Kennedy. They hit it off and decided to build a production company together – from there Hilow Films was born. Their highlights of the past two years include ‘Shogun’, a documentary commissioned as part of Idris Elba’s BBC3 takevover; ‘The Hardest Word’ which won a gold YDA award at Cannes; Shura’s music video for the single ‘Indecision’; a screening at the BFI Flare Film Festival of their documentary ‘Incomplete’ and a documentary made for The Royal British Legion in aid of their 2015 Poppy Appeal Campaign, getting them a five star rating on ‘Davids Reviews’.