Using silent vignettes, music, and sign language, “Sign” uniquely tells the story of a relationship between Ben, a hearing man, and Aaron, who is deaf. 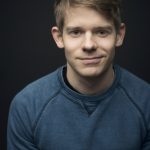