Alaska Is A Drag

Tough, but diva fabulous, Leo, an aspiring drag superstar, is stuck working in a fish cannery in Alaska, forced there to “man-up” by his unreliable, evangelical father. Leo dreams of international stardom but spends his days arm deep in fish guts or hanging out with his ailing sister and throwing shade at the local bully.
When the cannery boss, who moonlights as a boxing coach, sees Leo’s natural talent for throwing punches, he asks Leo to train for an upcoming bout. Leo seeing his chance to make a name for himself accepts, but when a new boy arrives in town and wants to be his sparring partner, Leo has to face the real reason he’s stuck in Alaska. 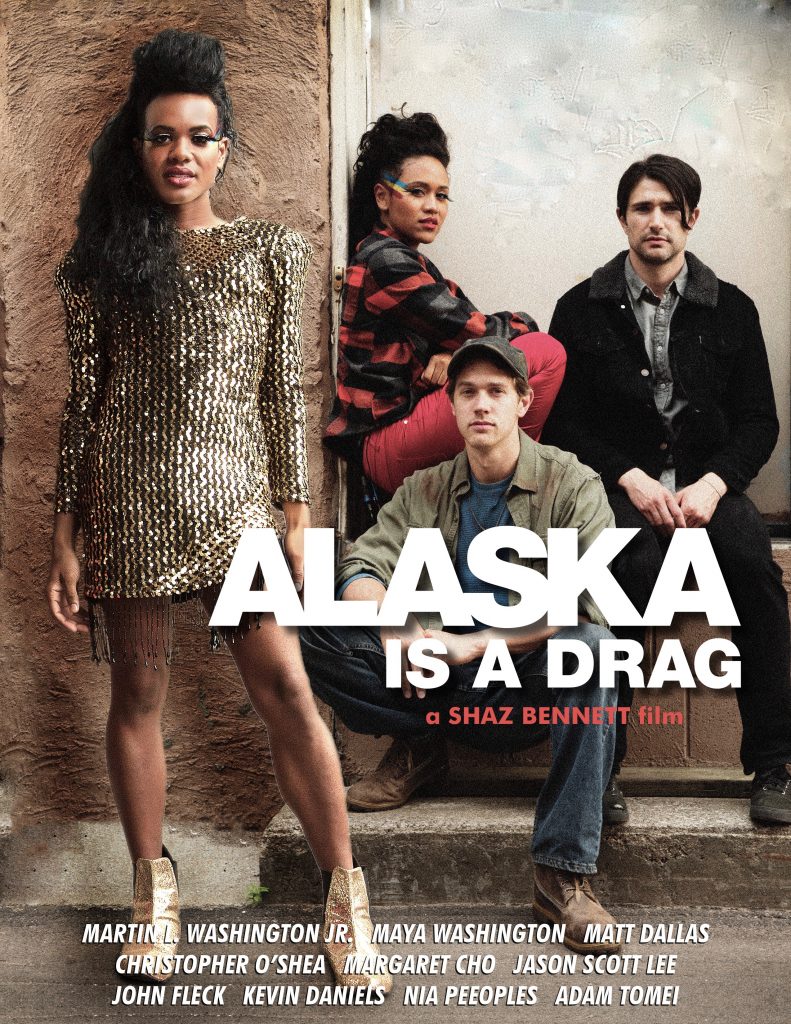 “The process of making ALASKA IS A DRAG has been unwieldy, demanding, glamtastic and wildly fulfilling – just like a day in a fish cannery.
It all started from my own daydreams – while working in a cannery. I grew up a mutt in Salt Lake City, Utah. I felt trapped and dreamed of living in Paris in the 20s or PARIS IS BURNING – somewhere else. Leo is very much me. But so are all the characters. I think we all can relate to the daily struggles and feeling stuck. Leo is a fighter and I like to think I am too.
When, I finally got out and moved to NYC, I performed in a drag sister act with a 7 foot tall black drag queen. Once, after a show, walking home dressed in matching fabulous outfits – we were attacked by two homophobic jerks. I’m a pacifist and a wimp and immediately cowered but my sister was fearless – she ran straight at them throwing hard punches and they ran away. She saved me. I asked her where she learned to fight like that and she said, “A girl picks up skills along the way.”
On some level the film is the distillation of those memories, but when Martin, the actor who plays Leo and I met (he also stars in my short film), we talked a lot about his character and Martin felt that I had written him as a young man growing up in Philadelphia, there is so much of Martin in Leo. We discovered his drag persona together, with heaps of Grace Jones.
It’s more of an origin story that Hedwig, I wanted to explore the first time someone performs in front of an audience on stage. Throughout the film, Leo is drawing on that power, building inside of him. Drawing on the northern lights and memories of his mother and the strength of his sister.
I love the power of drag -– there’s great strength and energy in tapping into and subverting the norms. Leo is just learning to harness that power. I wanted to explore the collision of gender and the pageantry of boxers and drag queens.
Alaska seemed like the perfect setting for it, I spent a summer working in a fish cannery and Alaska is surreal and intense with the ethereal Northern Lights painting the sky, in stark contrast to the monotony of cannery life and the violence of isolation, where standing out in a crowd isn’t a good thing. I dove into the moments of where and how those worlds collide, intertwine and break away – the gay and the straight, the masculine and feminine, violence and non-violence, harsh reality and escapist fantasy.
I wanted the fights and the drag sequences to have overlapping elements and all occur in the real locations i.e.: the cannery or the makeshift gym, a woodsy path or the RV.
I’m drawn to and obsessed with the flamboyance and bravado of boxers and drag queens – they are the fun house mirrors of each other. One is wholly female and the other wholly male – in a way that doesn’t always exist in real life. The actors and I talked about the innate sensuality and vulnerability of two men boxing that informs the relationship of Kyle and Leo and later Declan and Leo. At its core, the film is about survival and friendship.”
The feature script was developed through the Naked Angels Development program “Angels in Progress”. And was selected for labs at Sundance and Film Independent, IFP Narrative Lab — the short film was made as one of eight projects as a part of the prestigious AFI Directing Workshop for Women.