A married couple is unexpectedly faced with their relationship issues when they take ballroom dance lessons. 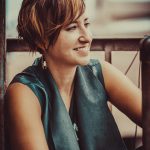 Lisa Donato is a writer, director, and activist from Billings, Montana and based in Austin. Her award-winning work has screened at hundreds of film, music, and art festivals worldwide. Lisa strives to bring social awareness to marginalized and invisible communities and believes that comedy will mend the tense and politically-polarized culture of the U.S.
The first feature screenplay that she co-wrote, Signature Move, is a coming-of-age Muslim drama about a woman who takes care of her TV-obsessed mother and copes by taking lucha-style wrestling. It was invited to the TriBeCa marketplace and world-premiered at SXSW (2017). Her short comedy, Spunkle, won the LGBTQ EMERGING FILMMAKER SHOWCASE at Cannes (2017). It’s about a brother who contemplates fatherhood when his older sister and her wife ask him to be their sperm donor. The News Today, inspired by the Orlando Pulse Nightclub tragedy, was one of 35 short films in the world that was shortlisted for the prestigious UK Iris Prize. It highlights the last ordinary moments between two guys in love. And her short documentary that she created with Fawzia Mirza, Reclaiming Pakistan, won the Ron Kovic Peace Prize and the Dan Eldon Activist Award.
In her spare time, Donato provides free haircuts for Austin’s homeless community and collects personal experiences through optional filmed interviews (Hobo Salon). Other story and directing credits include shows for Nat Geo Wild, Oprah Winfrey Network, PBS, published personal essays in the LA Times, Self Magazine, Curve Magazine, 5280, and Austin Woman.