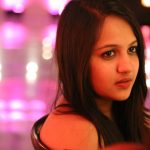 An economics major from one of the most prestigious universities in India, Risheeta Agrawal’s career took a drastic turn when she decided to divert her attention to the media Industry.
For almost 5 years as the Creative Director of a leading event agency “EO2 Events” in India, she moved based to Prague to study filmmaking at Prague Film School.
She is now here, a year later, presenting her first short film ‘Naughty Amelia Jane’.