Ari, a sophisticated and urbane Gay man, moves into a care home and encounters Beau, the beautiful, heterosexual, illiterate former thief who is now his Carer. Their unlikely  meeting changes the future for both of them.

The Carer official TRAILER from Christine Templeton-Parker on Vimeo. 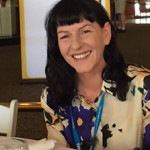 Christine Parker is a screenwriter and director and also teaches filmmaking. She is a Senior Lecturer at the University of Derby, UK, where she is Programme Leader of the MA Writing for Performance, and teaches into the MA Film and Photography, BA (Hons) Film Production.
Her short films and first feature Channelling Baby (2000) represented New Zealand in official competition at dozens of International Film Festivals. Her New Zealand films were nominated for fourteen awards, winning on several occasions. Since relocating to the UK in 2009 she has completed a Ph.D. by publication and continues to make films and film art installations, including Quickening(2016), which was exhibited at the Sichuan Institute of Fine Art and has recently been exhibited at Pickford House Museum, Derby from November 2016 to January 2017, attracting and audience of three thousand visitors.
70-779
Her short film The Carer (2016) has won five Awards of Excellence and a Humanitarian Award of Distinction from the US based Best Shorts Competition and an Award of Excellence for Short Film at the Global Accolade Awards. It had its World Premiere in competition at Palm Springs International Shorts Festival in June 2016 were it was one of 300 selected from almost 5000 entries.  The Carer was also shortlisted for The Iris Prize- Best British Short Film in October 2016, and won a special commendation, which qualified it to compete at BAFTA. It was also in official competition at the Academy Award qualifying Edmonton IFF in October 2016 and received many more invitations to screen at festivals around the world including in Paris, Hong Kong, and Moscow.  In 2017 it is touring the UK with ‘The Best of Iris’ theatrical compilation and has won the Premio Labor 2017 Award at the Festival Internazionale Immagine d’Autore (FIIA) in Italy.